January 6 marks the twelfth and final day of Christmas. On this day, many Christians celebrate the feast of Epiphany, which ponders the manifestation of God among us in Christ and in our human stories. The feast originates with the story in the Gospel of Matthew that recounts how wise men from the east were sent by King Herod in search of the Christ-child. The wise men followed a rising star until it stopped over the child’s house. They entered the house, found the child with his mother Mary, and paid him homage by offering gifts of gold, frankincense, and myrrh (Matthew 2:9-11).

Matthew’s mention of King Herod, a vasal king of the Roman Emperor, signals social-political oppressions at the hand of unjust rulers. Matthew suggests that because Herod felt threatened by Jesus, he ordered the massacre of all infants in Bethlehem (Matthew 2:16-18). Fearing for Jesus’ life, Mary and Joseph take him into Egypt (Matthew 2:13-15).

“Gift every American with leadership that models our democratic ideals, enables healing, and protects us from all enemies, foreign and domestic.”

Fearing for my own life in 1974, my parents fled Castro’s Cuba and migrated to the United States. This personal experience of exile inspired the letter I wrote four years ago pleading with the Trump administration to listen to the “huddled masses…the wretched refuse…the homeless, tempest-tost.” Instead, the Trump administration misused the Bible to justify separating immigrant families, forcing children to live in cages. Attacks such as these on our nation’s religious and civic ideals stirred and culminated in the failed attempt by insurrectionists to overturn the results of the free and fair presidential election in the People’s House on the feast of Epiphany.

I take this opportunity again as a Cuban exile, a concerned citizen, and a Catholic theologian who had the honor to serve this country as the ninth U.S. Ambassador to the Holy See to appeal to you President Biden, to you Vice President Harris, and to this new Congress to finally enact in our land just and comprehensive immigration reform. This reform must be part of a broader effort to resist what Pope Francis calls the human indifference that plagues our world, which raises physical and relational walls that enslave us within those very walls.

I pray that you follow the rising stars within you to find the missing immigrant children separated from their families. Gift every American with leadership that models our democratic ideals, enables healing, and protects us from all enemies, foreign and domestic. 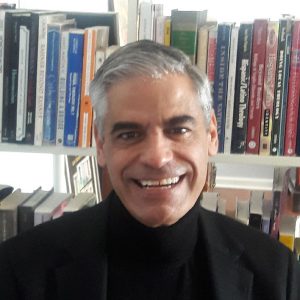 Miguel H. Díaz is the John Courtney Murray University Chair in Public Service at Loyola University Chicago. Dr. Díaz served under President Barack Obama as the ninth U.S. Ambassador to the Holy See and in 2013 received the prestigious Virgilio Elizondo Award for distinguished achievement in theology. He is co-editor of Disruptive Cartographers: Doing Theology Latinamente and is working on a collaborative project rethinking theology and pastoral practice from Queer and Catholic Voices of Color. Prof. Díaz contributes to efforts that bridge faith and public life, and he participates in diplomatic initiatives in Washington, D.C. to advance human rights globally, including the Atlantic Council and National Democratic Institute.