#BlackLivesMatter protests from the summer of 2020 and a white supremacist insurrection in January 2021 should not be equated. The two are morally, ethically, and spiritually incomparable.

Deadly, systemic racism devalues African-American citizens and other people of color in our country. Such racism implicitly and explicitly advocates violence, exploitation, and neglect. #BlackLivesMatter demands reparation for these historic wrongs. White supremacists, in contrast, seek homogeneity and believe power should be concentrated in one race, religion, and set of social values—a logic that values white lives more than others.

Jesus’ disturbance in the temple (Mark 11:15–19) helps illustrate this logic. In this story, Jesus enters the Jerusalem temple and, in a fit of righteous anger, overturns the money-changers’ tables and creates chaos among merchants. Jesus’ actions attract the attention of the authorities who plot his death. Americans love to tell this story as an allegory of how righteous anger fuels the political agenda of charismatic leaders across the political spectrum.

“…no one, not even Jesus, enacts liberty, equity, or justice without first building community across difference.”

This story can paint anger as a productive tool of justice. Yet, one charismatic man—even one called Lord and Savior, Son of God—does not single-handedly change the course of justice with his disruption. The incident in Mark could not, would not, and did not happen without the organization and cooperation of enslaved people who operated the money changers’ tables. Or the impoverished women selling small animals to religious pilgrims. Or the disenfranchised workers earning precarious wages. These enslaved people, women, and workers knew how to stage Jesus’ protest—a protest that was not about take-over, but about unshackling people from state-sanctioned violence and exploitation. Mark 11:18 notes that after the protest, a crowd listened, spellbound, to Jesus’ teachings. Then the movement must have continued working toward emancipation for the sake of the liberative, equitable community God plans for our world. Had they not continued organizing, we would not know the hope of justice, liberty, and equity today.

The same communal ethic must drive American politics: no one, not even Jesus, enacts liberty, equity, or justice without first building community across difference. Build that community. Empower those who already have. 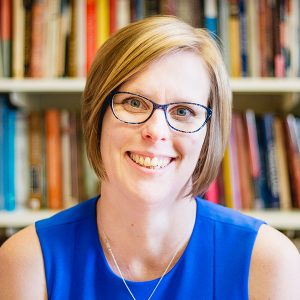 Katherine A. Shaner, Assistant Professor of New Testament at Wake Forest University School of Divinity, studies the intersections of race, class, and gender as well as the ethics of contemporary biblical interpretation. Her book, Enslaved Leadership in Early Christianity (Oxford University Press, 2018), challenges readers to re-think common perceptions about how enslaved persons participated in early Christian communities. She is an ordained pastor in the Evangelical Lutheran Church in America and a regular guest preacher and presider.