As an immigrant, I have been concerned with U.S. immigration and foreign policies. The U.S. wars in Afghanistan and Iraq started under the Bush administration, and the former is still ongoing. Trump’s discriminatory executive orders have indelibly impacted refugees, immigrants, members of LGBTQ communities, and more.

However, President Biden, your State Department speech demonstrates your determination to restore diplomacy in U.S. foreign policy, as well as to bolster democracy by defending equal rights of all people. I applaud your effort to open the door to refugees worldwide. You state that “we shined the light of…liberty on oppressed people.” U.S. moral leadership can use its global power to promote liberation and peace and serve as an example for the world.

“Do not quench hope and light scintillating in the visionary’s heart.”

We can find inspiration for such a global vision in Jewish and Christian scriptures. Isaiah proclaims God’s message: “I have given you as…a light to the nations” (42:6). Note that these words were given to a people in exile, not to a powerful empire.  Just as the prophet Jeremiah feels called by God to fulfill a mission (1:5), Paul understands himself called to proclaim the good news of Christ among nations under Roman imperial rule (Galatians 1:15-16).

U.S. global leadership will never shine via White supremacist liberalism and imperial exceptionalism. Instead, as the poet Amanda Gorman envisioned, the future of U.S. democracy should not be based on the inherited pride of being American, but on shared power. This young Black poet dares to climb the hill built not on “the blade,” but on “all the bridges we’ve made.” Inspired by Micah 4:3-4, she anticipates the “promised glade” where “everyone shall sit under their own vine and fig tree and no one shall make them afraid.”

I hear this message not only as a biblical scholar, but also as a transnational subject living with transmitted memories and traumas of the unfinished Korean War. Sadly, such U.S.-involved or -backed wars continue. Work with the international community on peace processes to end wars and occupations and cut military spending. Do not quench hope and light scintillating in the visionary’s heart. 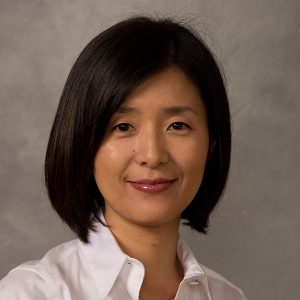 Jin Young Choi, Professor of New Testament and Christian Origins and Baptist Missionary Training School Professorial Chair of Biblical Studies at Colgate Rochester Crozer Divinity School, is the author of Postcolonial Discipleship of Embodiment: An Asian and Asian American Feminist Reading of the Gospel of Mark (2015). By weaving biblical narratives together with diverse interpretative threads, her work focuses on the intersection of race/ethnicity, gender, empire, and early Christianity. Dr. Choi has also co-edited volumes such as Minoritized Women Reading Race and Ethnicity: Intersectional Approaches to Constructed Identity and Early Christian Texts (2020) and Faith, Class, and Labor: Intersectional Approaches in a Global Context (2020).