I truly never imagined that in my lifetime I would see a woman in the role of President or Vice President of the United States of America. Said pessimism was not due to absence of hope but awareness of the misogyny and patriarchy that still thwart ideals for public and political leadership. I pray that this national milestone is not mistaken for problems solved.

In the church, I have witnessed all too often the election of women to prominent leadership roles, which then occasions complacency in the work toward dismantling the sin of systemic sexism. In doing so, the church has sidelined the biblical and theological commands that demand persistence and vigilance in advocating for the full glory of the reign of God.

“We are tempted to rest on our laurels and conclude … that a woman one step away from the presidency is sexism and misogyny overcome.”

Jesus knew well the human tendency to circumvent the capacity of God’s love. In the Gospel of John, as Jesus sets out to travel from Jerusalem to Galilee, he takes his followers through Samaria. Outside of the Samaritan town of Sychar, Jesus encounters a Samaritan woman at a well. It wasn’t necessary to go through Samaria geographically. But it was necessary theologically: necessary for the disciples to realize what “for God so loved the world” really looks like (John 3:16). Jesus loves this unnamed Samaritan woman,  and Jesus needs her—Jesus’ mission will not be complete without her embodying this divine love. From the testimony of this unlikely “disciple,” her townspeople learn that a new rule is afoot. God’s reign will only be realized with her witness. But the disciples resist, as do we: how could Jesus be talking to a woman?

The frequent temptation of the church is to bask in its successes so as to skirt its responsibilities—dodging the truth about itself and assuming an inherent holiness. I see parallel presuppositions in our nation. We are tempted to rest on our laurels and conclude that a vision for democracy is democracy achieved, or that a woman one step away from the presidency is sexism and misogyny overcome.

I pray that you will fully embrace and embody this historic moment—a moment that will unleash both resistance and self-righteousness, but also a moment where the fullness of democracy’s dreams has never been closer. 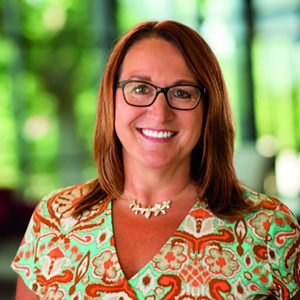 Karoline M. Lewis is the Marbury E. Anderson Chair of Biblical Preaching at Luther Seminary in St. Paul, Minnesota, and an ordained minister in the Evangelical Lutheran Church in America. Rev. Lewis  is the author of SHE: Five Keys to Unlock the Power of Women in Ministry, EMBODY: Five Keys to Leading With Integrity, A Lay Preacher’s Guide: How to Craft a Faithful Sermon, and John: Fortress Biblical Preaching Commentary. Lewis speaks internationally on the Gospel of John, interpreting the Bible, preaching, leadership, and women in ministry, and co-hosts the weekly podcast, “Sermon Brainwave” for Working Preacher.