I am exhausted. Four years ago, I wrote of the absence of hope and of how only determination remained: the determination to build a more socially, racially, and economically just United States of America no matter the odds. Four years later, that determination has been strained. As for so many, this past year of the pandemic exacerbated my weariness, leaving me overwhelmed by the losses of at least half a million in the U.S.A. alone, more loved ones than we can truly count. Every day I crave an end to so many struggles, and every day la lucha (the struggle) continues.

“…persistence requires a realistic accounting of what has been done even as we dream a future that cannot, must not, look like the past.”

I am one of the privileged in the pandemic—safely employed, fed, warm—so my exhaustion is small. I also know my cries of exhaustion may feel pressing now, but they have a long history, uttered by countless others with far greater cause. In 1964, civil rights leader Fannie Lou Hamer famously stated: “I am sick and tired of being sick and tired.” In 1983, Chicana author Gloria Anzaldúa wrote: “Perhaps like me you are tired of suffering and talking about suffering.” Even that enigmatic Book of Revelation, which offers no direct words of hope, underscores the quest for “patient endurance” in three of its seven opening letters.

Witnesses to persistence, Hamer, Anzaldúa, and Revelation share an unflinching account of dominant society’s violence alongside formidable visions of transformation. I learned from them that persistence requires a realistic accounting of what has been done even as we dream a future that cannot, must not, look like the past.

As this new day brings a new lucha, I permit my exhausted determination the smallest of hopes that, in Amanda Gorman’s moving words, we aren’t “broken but simply unfinished.” I also hope that we now take the time to mourn our dead, to truly reckon with the violence we have wrought on each other, and that we refuse any fantasy of a better past. Anzaldúa once wrote: “There are no bridges, one builds them as one walks!” As we walk, may we build a bridge to a future that reckons with the past but refuses to resemble it. 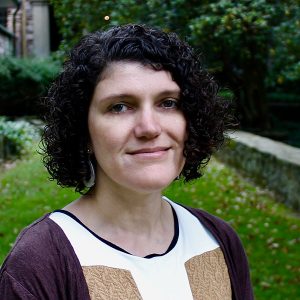 Jacqueline M. Hidalgo, Professor of Latina/o/x Studies and Religion at Williams College, studies scriptures at the intersections of gender, sexuality, and ecology in U.S. Latina/o/x contexts. A past president of the Academy of Catholic Hispanic Theologians of the United States (ACHTUS), she co-edited, with Efraín Agosto, Latinxs, the Bible, and Migration (2018). She is the author of Revelation in Aztlán: Scriptures, Utopias, and the Chicano Movement (2016) as well as many essays and articles.