When I try to convince my students that the Bible should be familiar to them no matter their religious affiliation, images do the job more persuasively than any arguments I might advance. These images include a photo of Inauguration Day, when the incoming President of the United States takes the oath of office with a hand resting on the Bible. Other images are troubling, among them the 45th president of the United States standing in front of St. John’s Church holding a copy of the Bible on June 1, 2020, after he used  tear gas and rubber bullets to disperse a peaceful crowd protesting the murder of George Floyd. The unsettling images also include a rioter outside the Capitol on January 6, 2021 holding up a Bible as though it were body armor and people wielding posters with citations from the Bible as though they were weapons.

It matters much less what we do with the Bible itself than what we do with its words once we open it! Author Václav Havel received the 1989 Peace Prize of the German Booksellers’ Association for his role in the “Velvet Revolution,” which brought a peaceful end to communist rule in Czechoslovakia. Havel’s acceptance speech invoked the Bible: “In the beginning was the Word; so it states on the first page of one of the most important books known to us. What is meant in that book is that the Word of God is the source of all creation…If the Word of God is the source of God’s entire creation then that part of God’s creation which is the human race exists as such only thanks to another of God’s miracles—the miracle of human speech.” Havel went on to ask: “Is the human word truly powerful enough to change the world and influence history?”

The answer to this question is an unequivocal yes. We have witnessed the power of words—even words from the Bible—to cause enormous harm. Yet, if we take Havel’s reflections on the Prologue of John’s Gospel seriously, words also have the power to bring about tremendous good. May this be a time when the words of our sacred texts move us to change the world, inspiring us to work to make a real difference for the common good. 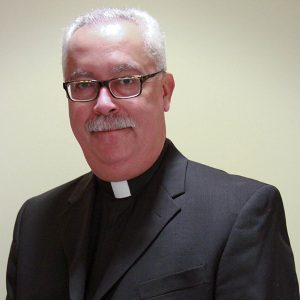 Jean-Pierre Ruiz is Associate Professor in the Department of Theology & Religious Studies at St. John’s University, New York, and Senior Research Fellow of the university’s Vincentian Center for Church and Society. During the Obama administration, he served as a member of the U.S. State Department’s Working Group on Religion and Foreign Policy. A Past-President of the Academy of Catholic Hispanic Theologians of the United States, he is the author of Readings from the Edges: The Bible and People on the Move.