As you continue with the enormous task of governing to “Build Back Better,” I encourage you to constantly remember those whom President Biden repeatedly described during his campaign, as the “backbone” of the nation: the middle class. And I urge you to extend that focus to the poor and all those whose lives have been crushed by long-standing adverse policies and prejudices, which you are in a position to redesign.

“Move your agenda beyond repairing our nation, to redesigning it toward justice and equity.”

The writers of the biblical Exodus story tell of a people that had fallen under the spell of xenophobic sentiments, economic hardship, ethno-nationalist political ideology, a massive health pandemic, and ecological devastation. Pharaoh mobilized his people, put specific laws in place, and created an enslaving structure for the Israelites. These realities made life “bitter” for the Hebrews (Exodus 1:14) and required a major redesign of the governing philosophy and praxis. The first task of that redesign fell on the midwives, Shiphrah and Puah. Because they stayed connected to the suffering masses, heard their voices, and felt their pain, they stood up to Pharaoh: “The midwives, fearing God, did not do as the king of Egypt had told them; they let the boys live” (Exodus 1:17). God then took notice of the people’s suffering (Exodus 2:25); and at the burning bush, God revealed a plan to Moses to liberate the people (Exodus 3), a plan recounted in the Passover ritual.

I encourage you to follow the tradition of the midwives: be brave and take actions that sustain life. Move your agenda beyond repairing our nation, to redesigning it toward justice and equity. Commit to the equally urgent and ardent work of sustained investment in the lives, communities, and ingenuity of those who have been crushed by the longstanding racism, sexism, xenophobia, ethno-nationalism, health disparities, and ecological devastation.

May you institutionalize the ways historically marginalized people are actually and really the builders of its democracy. May you show us how, together, we can reject racism, embody generosity, and create a better life for all. 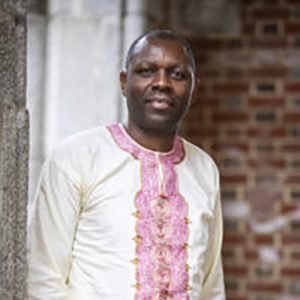 Kenneth Ngwa is Associate Professor of Hebrew Bible at Drew University Theological School. Dr. Ngwa holds a Ph.D. (2005) from Princeton Theological Seminary and a Masters of Divinity (1995) from the Faculty of Protestant Theology in Cameroon. His major research interests are in the areas of ancient Israelite Wisdom Literature and Africana biblical hermeneutics. He is the author of The Hermeneutics of the ‘Happy’ Ending in Job 42:7-17, and is currently working on a monograph titled, Let My People Live: Towards an Africana Reading of Exodus. He co-hosts a session on Religion and Health at the Global Health Catalyst summit at Harvard Medical School.