During the Second World War, in September 1939, paintings from London’s National Gallery were hidden in Welsh mines to keep them safe. Over time the public complained that some contemporary art and concerts were taking place in the National Gallery, but there were no great paintings to see. A patron pleaded: “Because London’s face is scarred and bruised these days, we need more than ever to see beautiful things.” After considerable deliberation, the trustees decided that one picture a month could be brought back from Wales and hang in the National Gallery, even at great risk. A poll was conducted, and the public selected Titian’s “Noli me Tangere (Do Not Touch Me)” as the overwhelming first choice.

Neil MacGregor, recent director of the National Gallery, speculates that what drew the public to Titian’s painting within the context of nightly bombings and air raids on London was the encounter between the living and the dead. Titian depicts the moment when Mary Magdalene, having first noticed the gardener outside Jesus’ tomb, hears him call her name: “Mariam.”  She replies:, “Rabboni!” (which means “my Teacher”) and reaches out towards the risen Christ. As he bends away, he leans over and blesses her (John 20:11-18).

The painting investigates what happens to physical love after death: and how physical love and spiritual love meet—or do not meet—but still can be reconciled. MacGregor sees Titians’ masterpiece as an incomparable meditation on love that continues without physical contact or proximity, for Christ protects, blesses, and loves without admitting physical touch. Enforced separation of sudden, unexpected death is overcome in a painting, showing connections between the living and the dead. As Song of Songs reminds us: “Love is strong as death” (8:6).

Lent is the journey from death to life that culminates in Easter when a community comes into being that holds out a promise of new and transformed life for the world. Let us enact that promise for all. 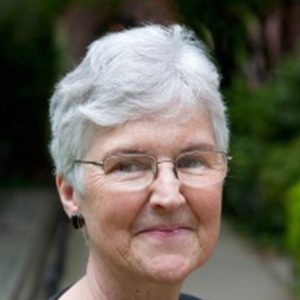 Deirdre Good, Faculty at Stevenson School of Ministry, Diocese of Central Pennsylvania, is an M.Theol.(hons) graduate of the University of St Andrews in Scotland (1975). She has an STM degree from Union Theological Seminary (1976), and a Th.D from Harvard Divinity School (1983). Canon Dr. Good was a professor at The General Theological Seminary in New York City for 28 years and academic dean for two years. Her books include Jesus the Meek King (1999), Jesus’ Family Values (2006), Mariam, the Magdalen, and the Mother (2005), Courage Beyond Fear: Re-formation in Theological Education, co-edited with Katie Day (2019). In press with Lexington Fortress is Borderlands of Theological Education, co-edited with Josh Davis.