If our American values motivate us to try to eradicate discrimination, then we need to listen to the voices of those who are being discriminated against. In the South Asian community, that means listening to the voices and stories of Dalits, a community considered to be at the “bottom” of or outside the Hindu caste system.

While all too many South Asians in this country experience various forms of racism, many also perpetuate another form of oppression connected to casteism. A 2016 survey by a Dalit civil rights organization found that many Dalits experience discrimination from non-Dalit South Asians in the United States. Investigating a recent case of harassment in the workplace at Cisco, Yashica Dutt found that people “feared that revealing their identity as a Dalit working in the American tech industry filled with higher-caste Indians would ruin their career.”

“…encourage us to be as passionate about caste discrimination as many of us are about racism and sexism.”

Because caste is an inextricable part of South Asian culture—particularly Hinduism—caste travels with South Asian immigrants, just like our languages, foods, and religions. Many Hindus in the U.S and India say they do not see caste, like many white people in the U.S. say they do not see race. Yet it is undeniable that shruti and smirti scriptures reify the caste structure, just as many Hindu rituals and celebrations, such as Holi, do the same.

Vice President Harris, you often talk about your inspirational mother, Shyamala Gopalan Harris. Remember that being a Brahmin gave her certain advantages, including her ability to travel to the U.S. to further her education. Acknowledging caste privilege does not take away from anyone’s achievements; rather, it helps to contextualize them.

As you engage with South Asians, encourage us to be as passionate about caste discrimination as many of us are about racism and sexism. We are counting on your leadership, openness, and honesty to help us address the caste system and its ramifications for us as Americans. 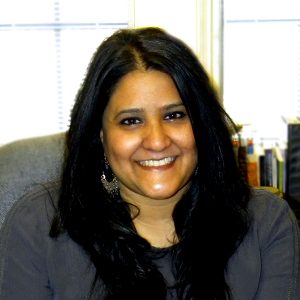 Shreena Niketa Gandhi is Fixed Term Assistant Professor of Religious Studies in the College of Arts and Letters at Michigan State University. Trained at Swarthmore, Harvard, and the University of Florida, she is a cultural historian of religion with expertise in religion, race, the Americas, and Hinduism. Her research and public scholarship are on the history of yoga in the U.S., and she is revising a manuscript on this topic using the framework of white supremacy and cultural appropriation. Professor Gandhi is also a member of the Feminist Critical Hindu Studies Collective, which encourages a reoriented approach to Hindu Studies which takes into consideration white supremacy and caste supremacy/brahmanical patriarchy.